Watch my video and think about which plants and animals might call a river or the riverbank their home.  Now look at the picture below of a riverbank and the animals that live there.  Swans and moorhens can both fly, but usually stay on the water surface or walk on the bank. Voles, shrews and otters have four legs, but are excellent swimmers. Kingfishers dive to catch fish, while dragonflies spend much of the time on the wing. Pond skaters and water boatmen glide lightly across the surface of the river.

Look at ways in which the creatures are specially adapted to this habitat. Herons and kingfishers have pointed beaks for fishing, swans’ bills are flattened for sifting through weed, and otters have ‘waterproofing’ in their fur and webbed paws for swimming. 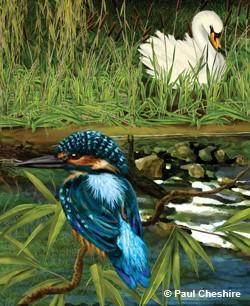 Use the information above, the fact cards attached and the picture below to think about what the creatures eat and then investigate food chains in this environment. Use thin card and string to construct mobiles, for example: plant – insect – frog – kingfisher. Stress that living things in habitats need each other to survive. Discuss key words like producers, consumers, predators and prey. 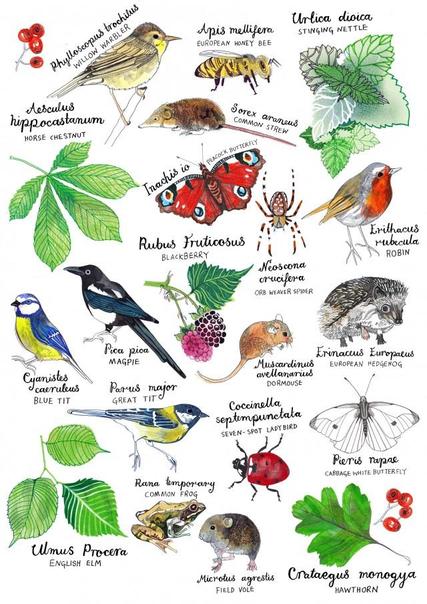 Consider the life cycles of the different creatures.  Ask your child to list the similarities and differences between their own development and that of river-based creatures. Birds produce eggs; mammals give birth to live young; while others, like the frog, have more complicated life cycles. Which young creatures look like their parents? Which look different? What stages do they have to go through to reach adulthood?

Discuss some of the dangers that the creatures could face, such as: flood, water pollution, plastic bottles and bags, metal cans, fishing line and hooks. How can we prevent such things happening? Challenge yourself to draw up a code of conduct for people using the riverbank.  Look at the activity sheet below to get you thinking about life at the riverside.

Look at the picture below and list all the animals that call a river their home.  How many do you recognise?  Use the fact cards (above) to help you learn more about the ones you don’t recognise.  Write a fact file about your favourite one.  Think about:

Where do we live? 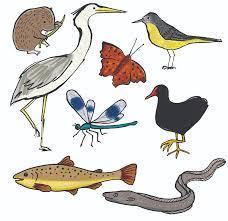 You will need: A large bowl of water; a selection of objects such as a coin, a cork, a leaf, a paper clip, a pebble, nuts in their shells, a metal teaspoon and a plastic teaspoon; an orange or satsuma; activity sheet, ‘Does it float?

Write the names of your chosen objects in the ‘Object’ column of the ‘Does it float worksheet’.

Fill in the ‘My guess – will it float’ column on the worksheet. Put a tick if you think the object will float and a cross if you think it will not float.

Test if each object floats by placing the objects, on by one, in the bowl of water. Do not test the orange/satsuma for now

Put a tick in the ‘Result – did it float?’ column if the object floated and a cross if it did not float.

How many of your guesses were correct?

For a bit of extra fun, guess if the orange/satsuma will float. Place it in the water.

It should float – did you guess correctly?

Now peel the orange/satsuma and put it back in the water. What happens?

The orange/satsuma should have sank. Can you guess why this should happen?

Wind in the Willows topic work

This classic story is set around the banks of a river and charts the special friendship between 3 animal friends.  There are many abridged versions for you to enjoy.

Here on some online versions for you to access…

Ratty, Mole, Badger and Toad are all firm friends. Write the following ten qualities on a piece of paper and ask your child which five they think are the most important in a good friend: loyal, clever, chatty, kind, sporty, happy, funny, honest, caring, generous. Are there any other words they would like to add? Ask them to think about their own best friend and why they like them so much. Why is it good to have friends? If someone looks lonely or unhappy in the playground, what can we do to make them feel better?

Mr Toad is just fascinated by transport—from cars and carts to trains and barges. What is it that fascinates him so much? Together, try and name as many vehicles as you can. Ask the them to consider how each vehicle moves. Does it have an engine for example, like a car? Or is it powered by some other means, like a bicycle, or a horse-drawn carriage? Encourage them to think about different modes of transport and the impact they may have upon the environment. Why is it important that we take the environment into consideration when we’re making a journey?

Make a Wind in the Willows collage based around the four seasons. Choose a scene from the book for each season, and use appropriate materials to support the image. If, for example, you are illustrating Mole in his winter clothes, use leaves for his jacket, bark for his hat, strips of brown corduroy for his trousers and moss for his sweater. Use all kinds of recycled scraps: old wallpaper, wrapping paper, magazines, even dried foodstuffs, such as lentils and pasta. The beauty of collage is that everyone can join in and add bits and pieces to make the picture!

Choose one of the riverbank poems you have created (see the English Writing activity) to set to music. Using percussion instruments (or empty tubs, pots and pans etc), work out a simple rhythm and tune for the poem together. You could even turn the poem into a song that can be recorded and played back to your family. If everyone enjoys making up the song, try and put a melody to Ratty’s ‘Ducks’ Ditty’, and work out some actions to accompany it. Then finish the project by singing it as a family performance via video call!!